Please note that my blog has moved to venusfitness.ca.

If you subscribed to receive email notifications of new posts  you should continue to receive those, however if this is not happening you can subscribe on my site.

WordPress.com followers will only see new posts in the Reader, you will need to subscribe on my new site if you wish to continue receiving updates.  You will find this button by scrolling down the page, it will be on the right.

Better late than never! I had plans for writing this post last week, but being away on vacation had me tied up relaxing and enjoying special moments with family… So now here I am finally writing my race review over a week later, not to worry I jotted down some notes to help me remember. The Scotiabank Vancouver Half Marathon, my 4th half marathon but the first for my boyfriend,  which of course made it a special run.

END_OF_DOCUMENT_TOKEN_TO_BE_REPLACED

The BlueShore Finaical Longest Day Road Race was a great race! I complete the 10km distance Friday June 19, 2015. It was my second time participating in this event so I had a good idea of what to expect.

The event communication was excellent, and the registration was a reasonable $33.  This didn’t include a shirt,  however it did include a great after party with an amazing spread.
This is a smaller race, there are considerably less participants than a race like the SunRun. I think some people find it hard to fight the traffic and make it to UBC on a Friday night. Despite the smaller numbers the atmosphere was awesome, the weather amazing, and the variety of food afterward gets two thumbs up!

END_OF_DOCUMENT_TOKEN_TO_BE_REPLACED 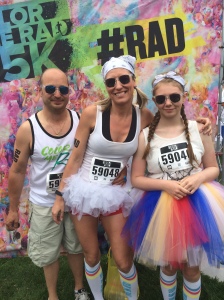 Having done both the Color Me Rad 2014 at the Cloverdale Rodeo grounds, and  the Color Me Rad 2015 in Holland Park Surrey, it  feels natural to compare the two events. Both had strengths and weaknesses, I will compare a few areas and pick a winner for each.

If you too participated in either of these events I would love to hear your comments.

END_OF_DOCUMENT_TOKEN_TO_BE_REPLACED

Over the Victoria Day long weekend I took my step kids to the Cloverdale Rodeo.   They  had never attended this event so it was a new adventure, which I was thrilled to share with them.

This is a notoriously expensive outing so I did my research. I got their ride passes at IGA the day before for $29 rather than the $40 gate price. I was also able to save on parking by arriving early and taking advantage of a church fundraiser, $5 parking. Whoot whoot! That’s a $27 savings

END_OF_DOCUMENT_TOKEN_TO_BE_REPLACED

For those that don’t  know me personally,  I am extremely organized that comes with the Type “A” personality. Making lists is a passion of mine, I have been known to make lists, to make lists. (terrible I know.)

One of the lists I started in 2014 was a Seasonal To-Do-List, I used it to make sure life didn’t get in the way, and we remembered to have fun! It was such a success I am doing it again this year.

So here is my Summer of 2015 To-Do-List, follow me on Instagram for updates, and stay tuned for my end of summer blog recap.

Last year I completed my first BMO event, the 8km.  This year I was a bit more ambitious and took on the half marathon (21.1km), making it my third half marathon to-date.  Finishing the race wasn’t my only objective, one of my personal goals for 2015 was to complete a half marathon in under two hours.  I am happy to report that  four months into the year I can cross this off my list.  I finished the race in a respectable 1:58:44, a new personal best.

The race started on a Sunday morning at 7am. I was up bright and early at 5:15 am. I left all my clothes and gear out the night before, so I didn’t have to think too much first thing in the 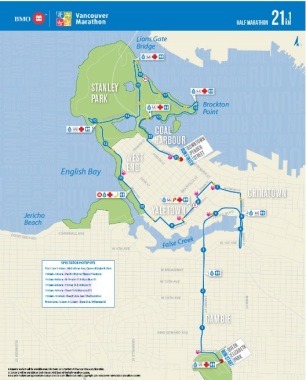 morning. I made coffee and was out the door by 6:20am.  In retrospect this wasn’t enough time.  After parking, catching the train, and walking 15 minutes from the suggested station, I made it to the start line with nine minutes to spare.  The line-ups for the bathroom were completely unrealistic.  A man on a megaphone was instructing people to go to their corrals, and that there were facilities along the route. I quickly came to terms with the fact I would start the race needing to pee.  I made my way to my starting corral with just enough time to start my Nike running app, adjust my headphones and music.  I chose to use the Nike app on my phone, and play music on another IPod so I wouldn’t completely drain my phone battery.  However I overlooked the fact that by using a different iPod I wouldn’t know my pace, but by the time I figured this out it was too late.

END_OF_DOCUMENT_TOKEN_TO_BE_REPLACED

I never thought I would be one of those people that says, “I’m going for a run, see you in a couple of hours.” For many years I ran for cardio to lose weight, but I never enjoyed the actual process until now.  It wasn’t until last year that I can officially claim to be a runner.  Running has become an escape; a way to see my surroundings from an organic perspective.

Last year, a girlfriend encouraged me to run a half marathon as I was running 5 times a week, averaging 30km a week.  She assured me that all I would have to do, was add one long run a week to what I was already doing.   After careful consideration, I decided that I needed a challenge, something to measure my progress against.  As fate would have it, the Rock’N’Roll marathon was hosting its inaugural Vancouver event for 2014, and I thought, “how perfect, the first Vancouver Rock’n’Roll would be my first half marathon.” And just like that I stopped listening to the, self-doubting part of my brain.

I had never run the distance of a half-marathon before, it was double the distance that I had run in the past, so understandably I was nervous, and unsure of what to expect. I used the book, “Running: The Complete Guide to Building Your Running Program”, by John Stanton, as my training guide.  As I completed each week’s long run my confidence gradually increased. 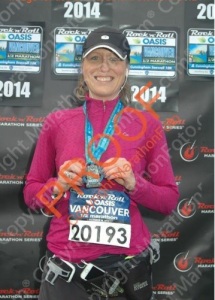 When the day finally came, I was ready, I knew without a doubt that I would cross the finish line, my goal was two hours and thirty minutes.   I started the run off slow, at the beginning I spent a lot of time distracted by my hydration belt.  After the first 10km I unloaded the bottles, making it easier to enjoy the last 11km.    As I neared the end of the run I felt strong enough to sprint across the finish line. I waved to my cheering family as I ran past to cross the finish line,  a different person than when I started two hours fourteen minutes and fourteen seconds before.